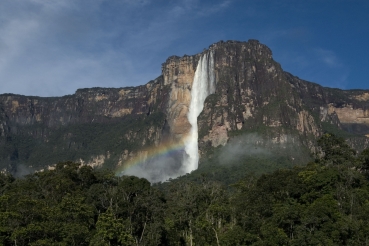 The world's tallest waterfall is Angel Falls in the rainforest of Venezuela. The height of the waterfall is 979 meters and the height of its continuous fall of 807 meters. Rapid flow of water down from the top of the flat mountain Auyantepui , forming a giant vertical slopes. Around the waterfall is worth a permanent fog, which can even be seen several kilometers away from this place.

Local Indians never rose to the top of the mountains and, of course, did not tell the Europeans about this miracle. They also believed that the spirit lives on the mountain "Mawari" who steals the souls of men. The local people call this waterfall Churun-Meru, which means "thunder." And the international name "Angel" was given to him in honor of the famous aviator James Angel, who in 1937 made ​​a flight over the falls. Due to damage to the airplane experienced pilot was forced to make an emergency landing at the top of the mountain Auyantepui. Famous pilot and his crew not only survived in the accident, but also for eleven days to reach the nearest village.

Today, Angel Falls in Venezuela is the main attraction. Waterfall is bred among the thickets with dense tropical vegetation, so get to it on foot is impossible. Angel Tours certainly include flight from Caracas or Ciudad Bolivar to Canaima village, which is the starting point for a journey to the national park. Next to the waterfall will have to swim through the water. The whole tour takes less than a day and will require special equipment and inventory provisions. For groups of tourists, rent a small plane, but even during the scenic flight is probable that Angel will not be visible due to heavy clouds. From December to March in these parts comes the dry season, the waterfall and relatively little water. However, at this time, is less likely to get between the cloud.

Feedback
Your attention and time spent on the site IGotoWorld.com is greatly appreciated. If you have any questions, wishes, complaints, or you desire to learn more about us, select the area you are interested in and click the link to make a comment or ask a question.
Feedback form
Request submitted successfully.
Send