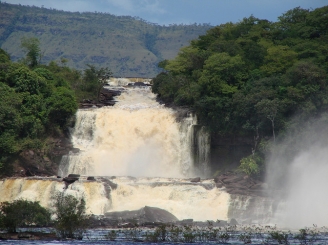 Canaima National Park stretches majestically in the south-west of the Republic of Venezuela. It was founded June 12, 1962. On it is the second largest national park in Venezuela and the sixth of the world's natural reserves. Its area is about 3 million acres.

Its name to the park owes its distant pre-colonial past. Then on its territory was home to several groups of Indians Kamarokotu, Arekuny and Taurepany. Their neighborhood was peaceful, often between tribes fierce war broke out. The echoes of that hatred could be reflected and the name of the park. In the language of kamarokotu called "Canaima" is - a killer.

This amazing beautiful park is located in the oldest part of the planet - Guyana array. Today the park is famous for its thundering waterfalls, lush vegetation, pristine landscape. The main unique attraction recognized the huge mesas. Due to the peculiar terrain there remain some prehistoric plants and animals.

In the park in the rain forest is the famous and the highest in the world Angel Falls. Water with a roaring stream falls down the mountain and before you reach the ground, it is sprayed into smaller particles and turns into a thick fog.

It is best to visit the park during the rainy season (April - November), at this time of waterfalls and rivers most affluent. In the park you can camp. All tours are accompanied by a guide. You can also take a sightseeing tour in a helicopter.

To get to the park you will be able to by air. Charter flights to Canaima Park depart from all major cities of Venezuela. The flight takes about 1.5 hours. Possible and hike, but it takes time and requires special training from the tourists. The most exciting way to the park is traveling down the river in a canoe.

Feedback
Your attention and time spent on the site IGotoWorld.com is greatly appreciated. If you have any questions, wishes, complaints, or you desire to learn more about us, select the area you are interested in and click the link to make a comment or ask a question.
Feedback form
Request submitted successfully.
Send